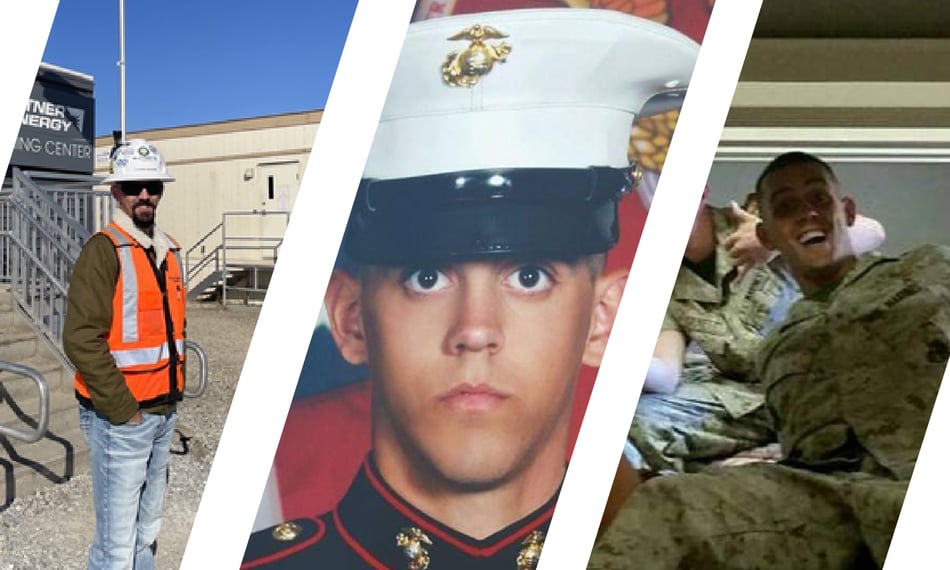 Bridgette and Kenny Davis still have a drawing that their son, Lane, made when he was in first grade.

Lane Davis’ teacher in Pencil Bluffs, Arkansas, asked her students to draw what they wanted to be when they grew up. Davis drew himself as a marine scout sniper. There was definitely some foresight involved in that drawing.

“I remember just wanting to make a difference in the world,” Davis said. “My dad, grandpa, great-grandpa and great-great-grandpa all served in the Army. I ended up breaking the tradition by going into the Marines. I got some flak for that, but it was worth it.

“Special forces guys always say, ‘You’re born for it.’ I believe that.”

Davis’ childhood dream came true when he joined the Marines in 2015. After getting through boot camp, he entered the school of infantry for training. To say it was difficult is an understatement.

“That training made me a strong-willed person. One of my instructors there told me ‘The mind will quit 1,000 times before the body quits once.’ I live by that to this day. That’s what gets me through. If something seems impossible, I always try and figure out a way to get the job done. The Marines make you a tenacious person,” Davis said.

Davis got to see the world during his time in the Marines, but it’s the camaraderie he built with his fellow Marines that he cherishes the most.

“We were the best of friends (in my unit),” Davis said. “It was on another level of understanding each other as a person. We were with each other 24/7. You had to know your friends like the back of your hand, especially in combat.”

Davis, who has been a site quality coordinator for Blattner Energy since February, was injured in the line of duty in 2018 and then medically discharged. The injury to his leg happened on a mission involving an IED (Improvised Explosive Device).

After the injury, Davis bottled up his emotions about what had happened. He was eventually switched to a reserve unit back in the United States, but what he’d gone through led to bigger issues, including a drinking problem.

“It was really bad. I was losing friends left and right as a result. I tried to push everything and everybody away,” Davis said. “Luckily, I met my wife and that helped put a Band-Aid on the problem.

But then, his demons resurfaced, and he started drinking again. Even though talking to his Marine buddies and other veterans helped, Davis realized he had to take steps to improve his mental health and sought counseling.

“Bottling everything up isn’t healthy,” Davis said. “I have finally realized that and am taking steps to make myself better.”

As a scout sniper, it was a matter of life or death for Davis to be detailed about everything. He learned to lead by example. Those leadership lessons he learned in the Marines have started to pay off on the Blattner solar energy project he’s working at in southeast Wisconsin.

As part of the Blattner HEROES group, which focuses on lifting up veterans who work for Blattner, Davis helped start “Mental Health Minutes” as part of his project’s daily all-hands meetings. Blattner field team members start the day with a meeting to discuss work and any personal items that are brought up. When Davis gets up to speak to his co-workers, he shares the importance of mental health awareness while trying to make sure no one feels the stigma that can go with it.

“That’s why I’m so adamant about mental health,” Davis said. “Blattner has a suicide prevention line and I always bring that up. The other part is telling my story and sharing the importance of talking about suicide prevention.”

Matthew Johnson is Davis’ site manager. Even though Davis has only been with Blattner since February, Johnson has noticed the difference he's making.

“Lane has been teaching and learning since I met him at the kickoff meeting for our site,” Johnson said. “Lane talks about his time in the Marines often while giving examples about how quality affects a process. He’s able to connect with other veterans from all branches on site and his experiences bring a different viewpoint to the table when trying to solve a problem or explain something.”

In talking about that stigma, Davis refers to it as “a repulsive plume of blackness that is full of shame, embarrassment and guilt.”

He doesn’t want anyone to feel that way when it comes to taking care of their mental health. As he’s dealt with his own PTSD (Post-Traumatic Stress Disorder) from his service time, he has had “shameful” feelings come up. He felt embarrassed to ask anyone for help because of what they might think of him for seeking help.

“The stigma around mental health definitely exists in the construction industry,” Davis said. “My goal is to end that sigma. It starts with boots on the ground and that’s why I’m trying to get this campaign going. I’m going to continue it as long as I can.

“I wanted to show them that I was tough. I know I have to stand up against that stigma – unwavering and resolute and teach others to do the same.”

At his solar energy project, there are six other military veterans who exchange stories, mostly about the good times. Focusing on the positive instead of the negative is something they all try to stick to. Talking with each other helps bring back the camaraderie they felt while serving.

“If you focus on the bad, you’ll never escape it,” Davis said. “We like to give each other guff, depending on what branch we served in. I try to focus on the good times and the man it has made me today. Before joining the Marines, I was just a scrawny kid who thought I knew everything. I was in for a big surprise.”

“These aren’t easy conversations,” Nulton said. “Lane has unique insight into these issues. He’s been a leader since he’s been here. He is breaking new ground on the job as well. Lane is improving how we handle materials and the supply chain. It’s an honor to work with him.”

Davis has formed a bond with fellow Marine, Desmond Banks, who is an Invenergy safety representative on the site in Wisconsin.

Banks served in the Marines from 2006-2016. When Davis started doing “Mental Health Minutes,” Banks recognized he was a Marine from the start.

“Marines know Marines from anywhere. When I first heard him speak at the all-hands meeting, encouraging everyone around the site to check on each other and reach out for help, I knew he was a Marine,” Banks said. “I went up to him, shook his hand and thanked him. He’s been consistent about it. Mental health awareness is his passion.

“He’s more than just a Marine or a Blattner employee, he’s a great human being.”

The two started a weekly social outing for all employees who were interested in coming. They meet up at the bowling alley in Paris, Wisconsin, every Wednesday to build camaraderie with their co-workers and the friendly competition is building.

Blattner's Lane Davis (left) and Invenergy's Desmond Banks have formed a bowling night with their co-workers at a project near Paris, Wisconsin.

“Everyone is away from home and it’s the perfect way to connect with each other,” Banks said. “The funny thing is, Lane started out as a terrible bowler. He was scoring in the 90s. I’ve always averaged around a score of 150. Now, a few months later, he’s beating me, and his average is 170. It’s a competition now. We have a bet to see who the first person to get a 200 score will be. It’s a lot of fun.”

The best part for Banks is seeing the impact Davis is making on the whole project team, not just with military veterans. Davis also invites other veterans to speak during Mental Health Minutes, including Banks.

“He’s invited me to speak and share from my heart,” Banks said. “To have that opportunity is an important thing for me. I see it working. Whenever he is up there speaking, people listen, not just the veterans. They all focus in on him, and they respect what he has to say.”

Planning For The Future

As Davis concentrates on his own mental health and staying sober, he’s also focusing on his future designing a house for his family near Pencil Bluff. While his wife and 2-year-old son travel with him for Blattner, they are looking forward to establishing a permanent home on familiar ground. He loves his hometown and its small-town appeal. An avid fisherman and hunter, he appreciates that the area is perfect for the outdoors with its proximity to the Ouachita River and Lake Ouachita.

Davis is happy to work for a company that is willing to help him grow, especially with the help of its HEROES group.

“It’s amazing to have this organization for veterans within the company. The group actively supports us and supplies us with information on how to connect with other veterans in the company,” Davis said. “You can see who’s a veteran on our internal group website – it’s amazing.

“I have fallen in love with Blattner, from its safety culture to the overall quality culture. It’s a good place to call home.”

To learn more about open positions with Blattner, click here.