Warrior Hockey Showcase More Than A Game To Military Veterans.

SARTELL, Minnesota –– This game was more than just about hockey.

The Minnesota Warriors hockey program, which has about 45 teams operating across the country in conjunction with the USA Hockey’s disabled hockey program, was founded in 2010 by U.S. Army veteran Andy Qualy.

The mission of the Warriors is to provide a therapeutic, recreational and educational opportunity for wounded, injured or otherwise disabled veterans.

In 2020, Blattner Company and The Minnesota Warriors held the inaugural Warriors Hockey Showcase.

After not being able to play the Showcase in 2021 due to the COVID-19 pandemic, this year’s game, which was played in front of an estimated 400 fans on Jan. 15 at Bernick’s Arena/Scheels Athletic Complex in Sartell, Minnesota, meant even more to the Warriors.

“It was humbling to have it taken away last year because we enjoyed it so much the first year we played. It’s all that much sweeter to be back out on the ice this year,” Warriors goalie Jeremy Koelln said. “Whether we win or not, this is the biggest game of the year for us.

“We can’t express our gratitude toward Blattner (Company) enough for doing this.”

A Company Supporting Its Own

The Showcase is the largest fundraising event of the year for the Warriors. More than 40 local companies contributed monetary or in-kind donations for the event. Those donations, along with proceeds from a free will offering at the door, raffle ticket and event activity sales and Blattner Company contributions, a check for more than $24,000 was presented to the Warriors. 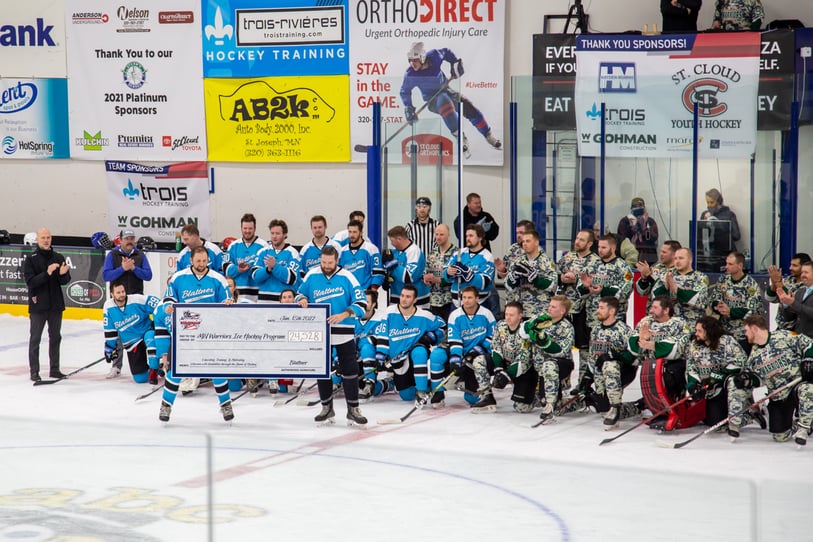 The Blattner hockey team presented the Minnesota Warriors with a check for more than $24,000 after the Showcase.

The Warriors will use part of the donation to help pay for ice time and travel expenses throughout the year. The Warriors play in national tournaments in New Jersey, Pennsylvania and Missouri and play regionally throughout the year. That travel time is vital for the Warriors to help support any of the players that might be having issues at that time. The time spent together on the road is a conduit of communication for everyone involved.

“No matter the skill level, whether it’s Class A, B, C or D, the guys get to go out there and play,” Koelln said. “This is an outlet for veterans. They might not know anything about hockey, but it’s an outlet where we can help them be a part of something greater.” 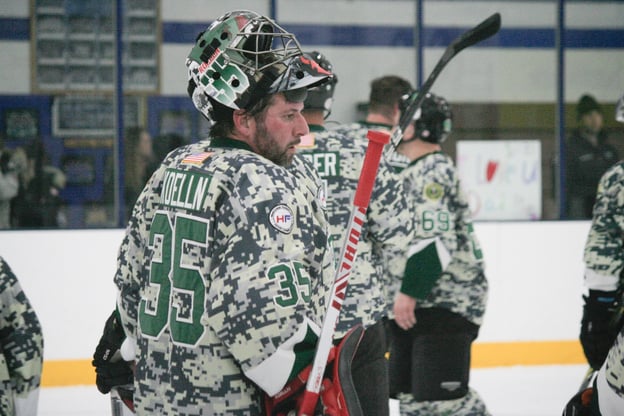 Minnesota Warriors goalie Jeremy Koelln talks with teammates after the conclusion of the first period.

One of Blattner Company’s employees is a veteran and a member of the Warriors. Lee Stevens is the building services manager at Blattner’s headquarters in Avon, Minnesota.

Stevens takes great pride in seeing how his employer supports an organization that means so much to him, in addition to the many other organizations and efforts the company supports throughout the year. Blattner’s employees contribute time and resources to support local organizations and community initiatives. Blattner donates and sponsors local schools, scholarship funds, charitable organizations, athletic teams and service clubs.

“It’s important for companies like Blattner to give back to service members because you will find service women and men living and working all over the country within nearly every organization,” Stevens said.

“For the Warriors, this event means a great deal to us. As the largest single fundraising event of the year, the proceeds help us in so many ways. Partnering with the local community and raising money for a great cause – that says a lot about Blattner.”

The Transition To Civilian Life

The Warriors offer veterans a chance to return to mainstream society that encourages camaraderie while promoting gentle transition into a greater comfort with their daily lives.

That transition after their service time is over can be a big challenge for veterans. For Stevens, working for a renewable energy and construction company was a big plus because the skills he gained in the military meshed well with Blattner’s culture.

Blattner’s dedication to veterans extends to off the ice as well. The Blattner HEROES program is an internal employee resource group dedicated to the support of Blattner’s employee veterans and their families and friends. It offers a variety of veteran-related resources, access to career development and recognition, and promotes veteran employee recruitment.

“The military instills discipline and work ethic, both instrumental in the construction and renewable industries,” Stevens said. “The military operates, in many ways, paralleling the Blattner Basics. You are trained to overcome obstacles and adversity, even when faced with difficult circumstances to achieve a goal as a team.

“This translates well to the industry as we continually provide a better construction experience.”

Stevens also plays for the Blattner Company hockey team. Although he was playing against friends on the other side, he was still hoping the Warriors would come out victorious. In the end, the Warriors beat Blattner 5-3.

“I knew the lead going into the third period wasn’t going to be safe,” Stevens said. “Blattner came out swinging that period. Tensions were high, adrenaline was flowing. Although the Warriors won, we know Blattner will want some payback next year. Win or lose, everyone was a winner. The windfall from the event will carry forward far beyond that final buzzer.” 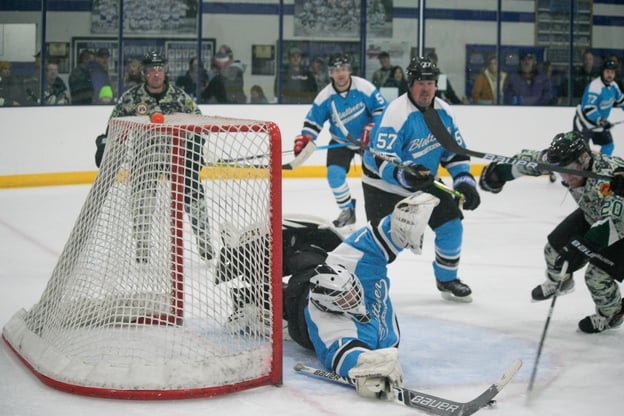 Steve Doree is the Warriors’ equipment manager. He has been with the Warriors since their inception in 2010. To see how much support the teams now receive from their communities means everything to him.

“I think it’s fantastic to have this support as a veteran,” said Doree, who served in the military from 1988-1993. “For guys up in the St. Cloud area, this event is incredible. It’s great Blattner does this.”

Koelln, who served from 2001-09 with the Minnesota Red Bulls, along with a 2005-07 tour in Iraq, ended the night in style at the Showcase. Not only was he the winning goalie, but he also proposed to his girlfriend, Kaci. And even better, she said yes.

“This was something special,” Koelln said. “Some of our guys have never played in front of a crowd like this. To have these guys hear their name called, to see the young kids watching and having fun, that’s what you take away from it.

“Win or lose, everybody won.” 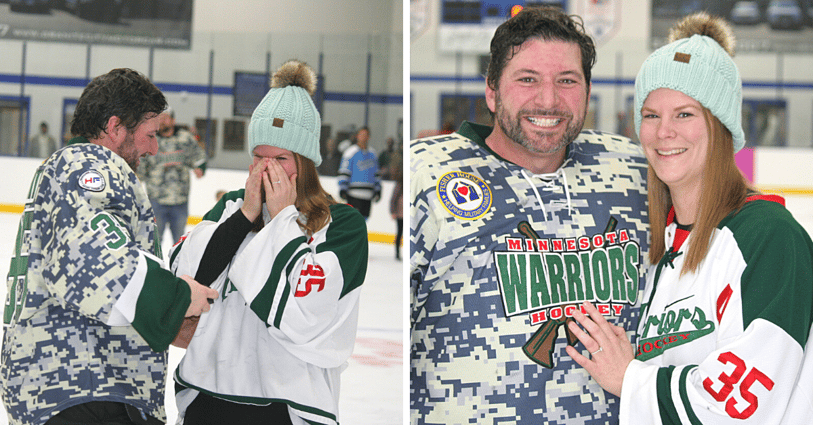 Jeremy Koelln proposed to his girlfriend, Kaci Krause, after the Warriors’ 5-3 win over the Blattner hockey team on Jan. 15 in Sartell. Krause said yes to the proposal.

The Showcase was livestreamed and recorded so hockey fans and the employees on Blattner’s nationwide jobsites would have access to watch the game. Almost 300 viewers tuned in to watch!

And, thank you to all the local businesses that donated to the Showcase, it means a great deal to the Warriors and Blattner. 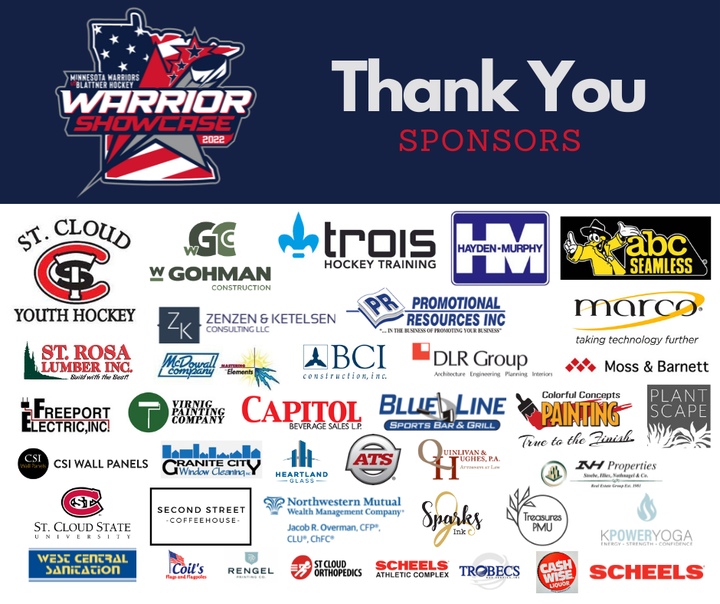